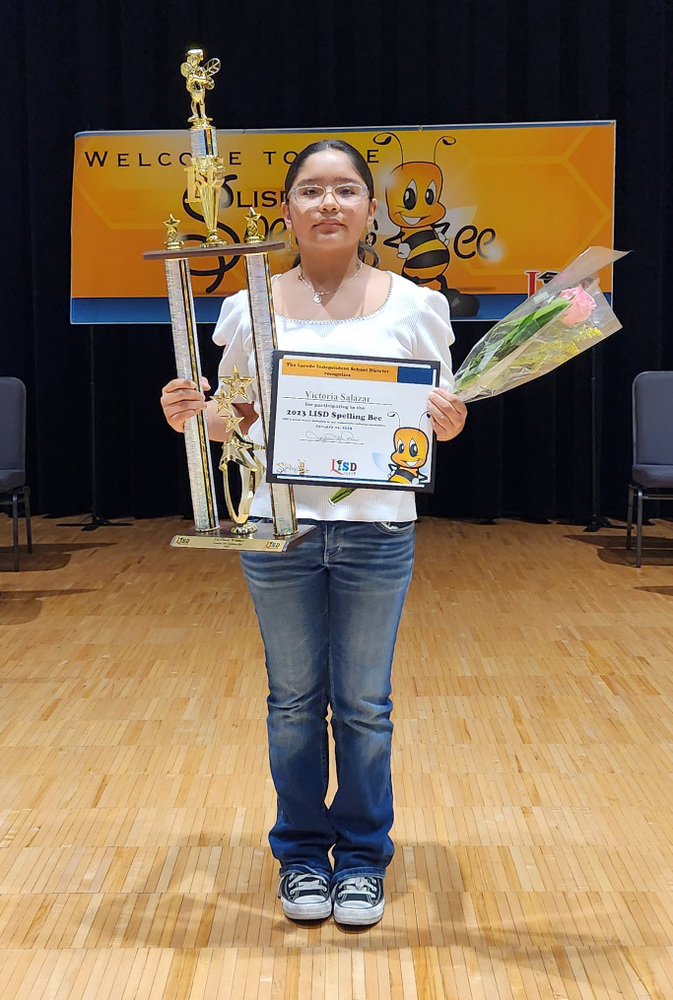 After 11 exciting rounds with Laredo ISD’s top spellers, Farias Elementary fifth grade student Victoria Salazar was declared the First-Place winner of the 2023 LISD Spelling Bee Contest, making her a back-to-back champion. The Bee was held on Tuesday afternoon at the Vidal M. Trevino School of Communications and Fine Arts Auditorium.

Salazar proudly held her trophy while posing for pictures with her parents Ricardo and Zulema Salazar, and her spelling coach Isela Mendoza. Victoria’s teacher is Giselle Castaneda. Victoria was also the winner of LISD’s Spelling Bee last year, making her a two-time Spelling Bee Champion. Salazar was the third-place winner in the 2021 LISD Spelling Bee.

Victoria aced this year’s Spelling Bee with these two final words: Arcturus which is defined as a giant fixed star of the first magnitude that is the brightest star in the constellation Bootes. Her championship word was carillon which is a set of fixed bells pitched in chromatic series of at least two octaves and sounded by hammers controlled by a keyboard, each bell being tuned to harmonize with the others.

Victoria put in a lot of effort into studying and getting ready for the Spelling Bee.

“I was excited and relieved when I spelt the last word. I spent a lot of time practicing and putting a lot of hard work in,” said Salazar. “My coach and my mom helped me learn the pronunciation of the words and how to correctly practice them, so I’m very thankful for all their help.”

LISD’s top spellers will be competing in the Regional Spelling Bee sponsored by the Laredo Morning Times and the Literacy Volunteers of Laredo on Saturday, March 25.

“Students participating in LISD’s Spelling Bee Program are introduced to more than 1,500 new words annually while increasing their vocabulary and strengthening their English language arts skills,” said LISD Executive Director of Communications Veronica Castillon. “We thank the students, sponsors, and parents for supporting this educational activity.”